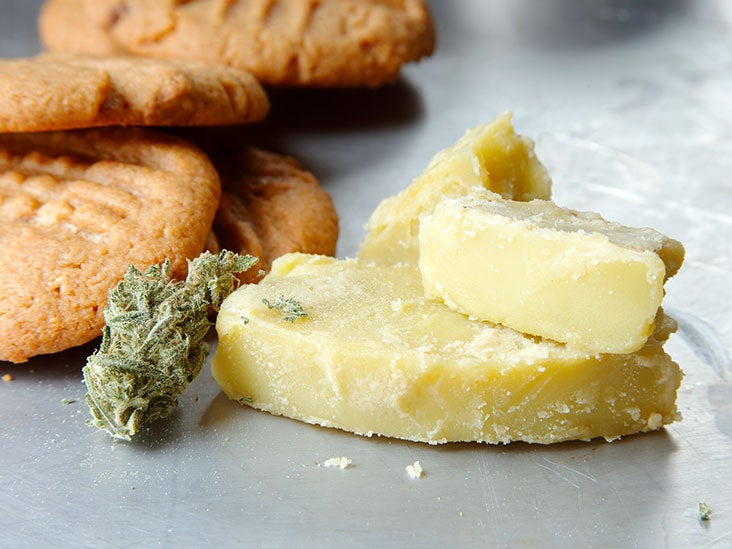 Edibles are food products that contain marijuana. The many forms of edibles include baked goods, candies, chocolates, and beverages. People can purchase ready made edibles, or make their own, such as oils, butters, brownies, and ice creams.

Edibles are apopular method of delivery for both medicinal and recreational cannabis.

Many people consider edibles to be a safe and discreet way to take marijuana. However, there are also risks that people should know.

Find out with this article about the effects and side effects of cannabis edibles, including how these differ from smoking marijuana.

Share on PinterestPeople need to know the possible risks before consuming marijuana edibles.

Edible marijuana products typically provide the same benefits as other forms of marijuana. People ingest them to achieve certain effects, such as relaxation, or to treat medical conditions, such as chronic pain.

The effects of edibles depend on the dose a person takes. Typically, the effects increase as the dose increases. However, consuming too much marijuana through edibles is easy to do, and it can cause adverse effects, such as nausea and vomiting.

Some of the beneficial effects of marijuana edibles include:

THC is the chemical responsible for the psychoactive effects of edibles and other forms of cannabis. An older study suggests that THC can cause feelings of relaxation and euphoria.

A 2019 study reports that more than 79% of people with anxiety or sleep problems who took CBD experienced a decrease in anxiety over the course of the study. Scientists need more studies, but this shows significant hope.

CBD may also work as a pain reliever, as well as having anti-inflammatory properties. This makes it a popular treatment among those who experience chronic pain.

Conditions that people treat with edibles and other forms of medicinal marijuana include:

Research from 2013 indicates that people experience significant improvement in muscle spasticity and other types of pain when they take marijuana.

An oral preparation derived from marijuana is available to treat muscle spasticity and pain. Other forms of edibles may have similar effects, although research in this area is lacking.

CBD has also demonstrated antiseizure effects, which suggests it could be a potential treatment for epilepsy.

A 2017 study cites evidence for the use of CBD to improve seizure control in those with specific epilepsy syndromes.

Edibles may be one way to ingest marijuana to reduce seizures. However, more research is necessary before people with epilepsy consider treating the condition with cannabis.

Edible marijuana products may also treat other health issues, such as appetite loss and weight loss, for those who have cancer.

While edibles are a discreet and tasty way to consume marijuana, they are not without risk. Potential side effects and risks include:

Research indicates that regular marijuana use can have adverse impacts on:

Long-term marijuana use may be especially worrisome in adolescents, where it may increase the risk of schizophrenia as well as learning and memory.

There is the possibility that children, pets, and others can accidentally consume candies, cookies, and other goods containing marijuana. Researchers do not know if there is a danger to pregnant women and the baby.

Between 2005 and 2011 in the United States, there was an increase of 30.3% in cannabis-related calls to poison control centers in states that decriminalized marijuana. Accidental ingestion of edibles was a common reason for many of these calls.

Edibles and other forms of marijuana can interact with alcohol and some medications, such as blood thinners. These interactions may intensify the effects of THC, or interfere with the actions of the medicines.

Overdose is another risk when it comes to marijuana edibles.

Concentrations of THC vary widely in ready made marijuana products. Likewise, it is difficult for people to know the strength of THC in homemade edible products. As a result, it is hard for someone to know how much they are consuming.

Edibles also take longer to have an effect than other consumption methods for marijuana, such as smoking.

The effects of smoking marijuana take minutes to occur, while edibles take 1–3 hours. Individuals may end up consuming larger amounts of the drug while waiting for the effects to begin, thinking they need more.

Additionally, the symptoms of overdose from edibles may often be more severe than overdose symptoms from smoking marijuana.

An overdose from edibles can involve:

Many individuals consider edibles to be safe, discreet, and effective, especially when they compare them to smoking marijuana.

Indeed, edibles do not expose users to some of the potentially harmful effects of smoking.

Cannabis smoke and tobacco smoke appear to have similar levels of toxicity, and both contain various toxins and carcinogens (agents that cause cancer).

Ingesting edibles does not appear to have these effects on lung function or cancer risk, which means they may be safer in these ways.

However, edibles pose their own risks, including the increased risk of accidental ingestion or overdose.

More research is necessary to understand the full effects of edible use and how these compare to smoking marijuana.

Edibles are a discreet way to ingest marijuana, and they do not appear to carry some of the risks of smoking the drug. However, people should exercise caution when using edibles, especially for the first time.

The effects of edibles may not emerge for up to 3 hours after ingestion, and there is a risk of overdose if people do not carefully limit the amount they consume.

Individuals should always adhere to the recommended dosage and stop ingesting edibles if adverse reactions occur.

Long-term, frequent use of marijuana can also have negative effects on mental and physical health.