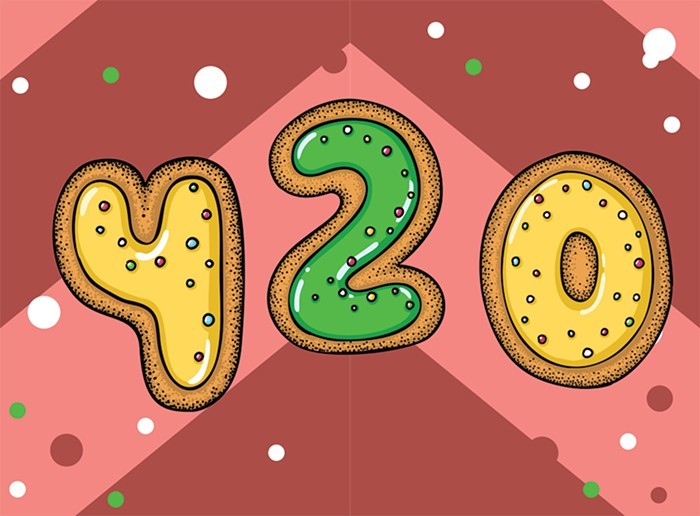 The 20th of April is right around the corner, and for those who celebrate 4/20 as a high holy day, bless your hearts. We can use an uptick in sales at our local pot stores, so stock up, and get down responsibly.

Not to be Donald Downer, but as always, please mind your edibles intake. I’ve written before about how badly such things can go when your edibles intake isn’t minded, but I haven’t yet gotten into how “bad” can veer into “so... much... worse” territory with the simple addition of the source of, and answer to, all of life’s problems: alcohol.

“Crossfading”—getting high and drunk at the same time—can be a risky proposition. There are numerous physiological reactions that occur when alcohol and cannabis go together, especially in large quantities, one of which is alcohol’s effect on your circulation, which in turn can increase your body’s ability to take in THC. A few whiskeys and a joint can take down even experienced faders, but when you add in a strong dose of edibles, anyone can get leveled.

For example: A friend of mine had gotten secretly and spontaneously married, and was in town to see me and one of her girlfriends, with whom she was staying. I presented her with a dozen of my cannabis cookies. They were very strong. I wrote on the box “These are very strong!!” and emphatically insisted that a portion was one half of a cookie, not to be consumed with alcohol. She nodded in solemn agreement. My friend is the one we all have: the Last Woman Standing during any session, finishing the joint no one else could, then immediately sparking up a fresh one.

“We just couldn’t stop. We’d eat part of a cookie, have a drink, eat more cookie—it was just the habit of snacking and drinking, not a conscious choice,” my friend explained later. Realizing they had made a huge mistake, they quickly retreated to Edith’s apartment. “And that’s when it started going south—fast,” my friend told me.

Edith was a pretty experienced drinker, but not much of a toker. Her paranoia became quickly pronounced, insisting to my friend that I was trying to kill them both, and the cookies included a fatal, fast-acting poison. My friend assured her that wasn’t the case, but Edith had an elaborate, improvised backstory that involved jealousy, betrayal, my friend’s ex-BF, and a gentleman’s agreement I had entered to bake tasty yet fatal cannabis cookies. It was like an episode of Riverdale.

My friend coaxed Edith to take a nap with her, in the hope it would help relax them. “We’re going to diiiiiiiiiiie,” Edith repeatedly and drunkenly whispered in my friend’s ear as they drifted off. My friend awoke shortly after to Edith shaking her violently, thrusting a phone in her face. “TELL HER! TELL HER JOSH POISONED US!” Edith shouted.

“Hello, 911, ma’am. Can you please tell me what type of poison you’ve taken?” My friend explained that wasn’t the case. “Ma’am, your friend said you have both eaten a large amount of poison. Please try and stay calm.”

“I am calm. I’m not poisoned, I’m really stoned and drunk, though.”

“Help” was two police officers, five firefighters, and two EMTs, all together in Edith’s small studio apartment. My friend explained they had only eaten strong pot cookies. (As Edith shouted, “NO! WE’VE BEEN POISONED! WE’RE GOING TO DIE! FROM POISON!”) The police shook their heads as they exited, with one firefighter asking if there were any left, and the EMTs explaining that once ingested, there wasn’t anything they could do to treat this clearly non-terminal overdose of edibles.

Edith insisted they be taken by ambulance to the ER, 11 blocks away, and that they each have their stomach pumped, which they did. Neither had insurance, and they got bills totaling $3,700.

So, a small takeaway: Don’t crossfade. Mind your edibles. And maybe keep your conspiracy-theory-minded friends from calling 911 on you.