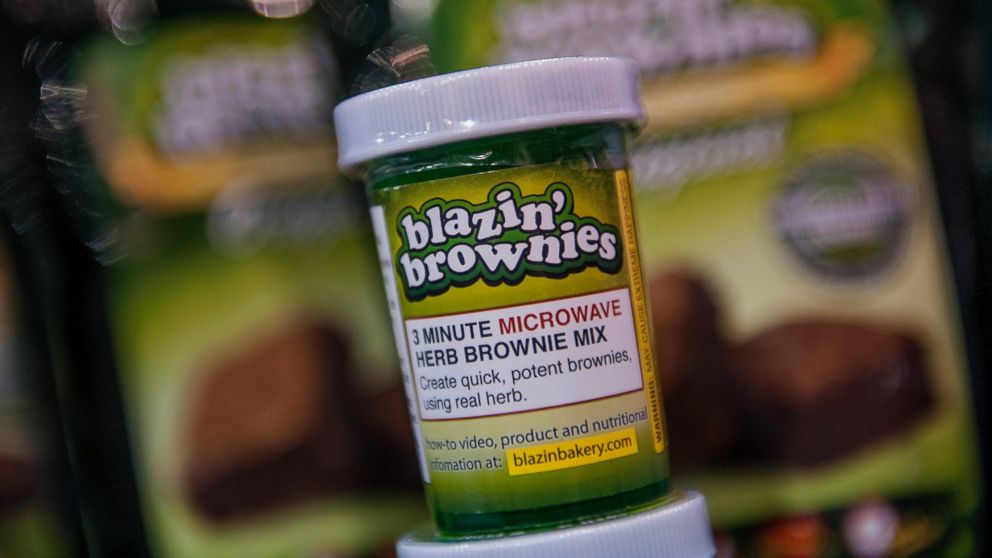 April 25, 2014 -- A string of worrisome incidents linked to marijuana might be enough to give pause to your typical, blissed-out pot smoker: Since when does weed trigger aggression or motivate someone to commit a crime and land kids in hospitals?

But recent headlines involving people under marijuana's influence might have some wondering if there's a link.

A Colorado man is accused of killing his wife after eating now-legal pot candy, Denver authorities said. A Wyoming college student leapt to his death from a Denver hotel balcony after eating a marijuana cookie purchased at a pot shop, police said. And at least one Colorado hospital has reported an increase in visits after children ate too many pot-laced treats, according to a study in JAMA Pediatrics.

Could it involve the way the drug is ingested -- in the form of pot cookies or brownies instead of smoking? There’s not enough research on edible marijuana to make a definite link, said Al Bronstein, a physician and medical director of the Rocky Mountain Poison and Drug Center, which handles local poison control issues. But Bronstein noted that edible marijuana is risky for several reasons.

“What we’re seeing with edibles is that the effect is delayed for approximately 30 minutes, depending on the person,” Bronstein said. “People get impatient for the effect and will take more, and then the symptoms are more pronounced than what they were expecting.”

In other words, if one cookie doesn’t get the job done, some people might be quick to eat another before the high takes effect, possibly resulting in an overdose.

It's also not clear how marijuana interacts with prescription medication.

Richard Kirk, the man accused of shooting his wife dead after eating marijuana candy, may also have been on prescription pain pills, The Associated Press reported.

With edible marijuana, there is portion size to take into consideration.

“That’s difficult to do, practically,” Bronstein said. “I know, myself: I wish I could only eat one-eighth of a Snickers bar and leave the rest for later.”

Samantha Rodin, a “budtender” at La Conte’s Clone Bar and Dispensary in Denver, added that edibles don’t affect everyone the same way.

“People need to be educated on how to dose themselves properly because everyone is different,” Rodin said. “I know someone who could eat three medical marijuana cookies and not feel it, and I can only take a bite and I’ll be good for a while.”

She warned people to read the labels carefully.

“Every package tells you how many doses,” she said. “Some of the [marijuana-infused] drinks I get, they’ll say four doses. Other packages might say 10 doses. The packages are labeled correctly. People get a little carried away.”

There’s also risk of children getting their hands on the pot brownies, candy and cookies.

“They’re lookalikes for common edible products,” Bronstein said. “So it’s difficult for a child to know the difference.”

Jim Gerhardt, a police sergeant in Thornton, Colo., and a board member of the Colorado Drug Investigators Association, agreed that marijuana edibles pose a new threat.

"Where kids are concerned, there are two issues," Gerhardt told ABCNews.com, speaking in his capacity as part of the CDIA.

"Sometimes smoking a drug is a little intimidating, especially if you're not prone to be a smoker," he said. "But eating a candy or brownie is a much easier way to ingest the drug, so it's less intimidating. Plus, those are products that kids are drawn to -- cookies and snacks, and things like that.

"And it's difficult for school officials to pick up on," he added. "You could sit in the cafeteria eating these cookies and brownies, and no one would know it's infused with THC."

Children's Hospital Colorado in Aurora, Colo., saw a significant spike in the number of children treated for accidentally eating marijuana-laced treats after Colorado relaxed its drug laws, according to a 2013 study published in JAMA Pediatrics.

A 4th grader in Denver brought a marijuana edible to school on Tuesday, police said. Earlier this month, a California teen was busted for allegedly selling pot brownies to fellow high school students after another student got sick, police said. Last month, three seventh-graders in California were hospitalized after eating what was likely a marijuana-laced brownie at school, the AP reported.

"What they'll do is extract high-concentrated THC from the plant," he said. "Most people use butane to do that, so we have a ton of explosions in our state right now. If they don't blow themselves up, then they get a very heavy-concentrated form of THC that can be baked into anything, put into any food or beverage."

“It’s kind of akin to the education about alcohol -- to drink responsibly,” he said. “People need to eat these edibles responsibly, and they have limited experience with these products. That’s the real problem. This is a drug. People need to be respectful of that.”