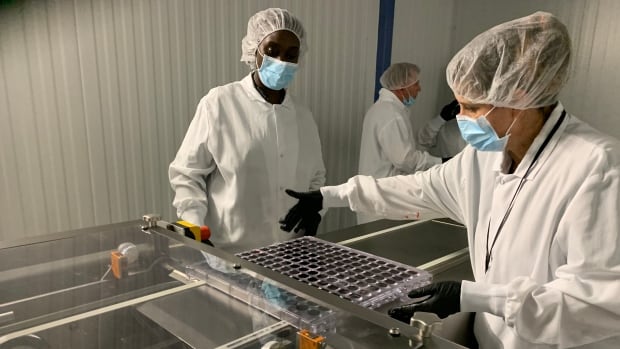 A new cannabis-infused gummy producer near Edmonton is set to be the largest in the country.

Dynaleo received its production licence from Health Canada last week. The company has a 26,000-square-foot warehouse in an industrial park just south of the city.

"The next phase of that would be getting our sales licence which we're currently very excited about," said Kristy Skwaruk, Dynaleo's director of people and culture.

The gummy product is a mixture of gelatin, sugar and cannabis oil. The company is banking on a demand for edible cannabis products.

A sugared batch of gummies from Dynaleo sits displayed on equipment in the company's facility south of Edmonton. (Travis McEwan/CBC)

The company is expecting to employ 75 people over the next year. As Dynaleo waits for its sales licence, it will produce gummies for other companies who are licensed to distribute to retailers, Skwaruk said.