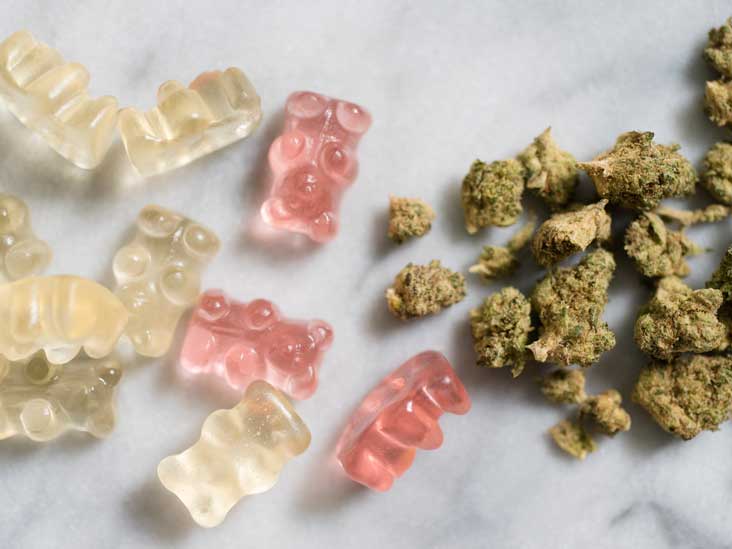 It’s a popular drug used by millions of people either for pleasure or to treat chronic health conditions.

Weed can be used in a number of ways, but some of the most popular methods include smoking and vaping.

However, some people wonder whether it’s safe to eat marijuana and whether ingesting it has the same effects as smoking or vaping.

This article explains whether it’s safe to eat weed and the health effects — both positive and negative — related to ingestion.

The short answer is yes, you can eat weed. In fact, marijuana-infused foods and drinks have been consumed throughout history, as far back as 1000 B.C. (2).

Marijuana was used as medicine in ancient China and India and was introduced to Western medicine in the early 19th century. Edible applications, such as tinctures, were prescribed to treat various conditions, from chronic pain to digestive disorders (2, 3, 4).

Bhang, a beverage made from a mixture of the leaves and flowers of marijuana plants, has been consumed for centuries during religious festivals, such as Holi, a Hindu festival of love and color (3, 5).

In the United States, recreational use of edible marijuana products became popular during the 1960s, and today, many different types of edibles are available, both legally and illegally, depending on state laws.

For example, gummies, candies, chocolates, capsules, teas, and oils are some of the edible marijuana products sold in both legal marijuana dispensaries and through the illegal marijuana market.

Edibles enthusiasts also make their own weed products by infusing butter or oil with marijuana and mixing it into baked goods and other recipes.

Though you can eat raw weed, it won’t have the same effect as consuming marijuana-based products, as marijuana has to go through a process known as decarboxylation to become activated (6).

Therefore, eating raw weed will not result in the same effects as consuming weed that has been heated, as in edible products like candies, tinctures, and baked goods.

Though you can’t get high from eating raw weed, some health experts believe that eating it may offer some health benefits due to the wide array of plant compounds it contains.

Yet, research in this area is lacking, so the potential therapeutic benefit of raw marijuana is still unclear.

Weed has been consumed in various forms throughout history for both medicinal and recreational purposes. Though you can eat raw marijuana, it won’t have the same effects as marijuana that has been heated.

Marijuana has many medicinal benefits and has been used to treat various ailments throughout history.

Today, edible marijuana products have a number of uses in the medical field and are becoming a more popular, accepted natural treatment in clinical settings.

Medical cannabis products can legally be prescribed in countries around the world, including Italy, Spain, Germany, and parts of the United States (7).

THC is one of over 100 active compounds — known as cannabinoids — in marijuana.

THC is the compound responsible for the psychoactive properties of marijuana products, including edibles, that may induce feelings of euphoria and relaxation (2).

Other compounds in marijuana, such as CBD, have been shown to have pain- and anxiety-reducing properties.

The powerful combination of therapeutic compounds in this plant makes it a popular natural treatment that effectively reduces symptoms of and eases pain related to various conditions.

For example, edible marijuana products, such as oils, tinctures, pills, and gummies, are prescribed to treat poor appetite, pain, and weight loss in people who have cancer (8).

In fact, pharmaceutical companies manufacture oral preparations of marijuana-derived treatments, such as Sativex, which is an oral spray prescribed to treat pain and muscle spasticity (12).

Though edible marijuana products are prescribed and used to treat many other ailments, such as digestive and neurological disorders, high-quality research in these areas is lacking.

Therefore, the full therapeutic potential of marijuana is still unknown (13).

Edible marijuana is used to treat symptoms related to various medical conditions, such as cancer and chronic pain. However, high-quality studies are lacking, so the full effects of marijuana products on health are still unclear.

Though edible marijuana products may benefit many conditions, some potential adverse effects may occur.

The main issue with edible marijuana products is that it can be very difficult to determine an appropriate dosage. Concentrations of THC vary widely depending on different factors, such as where the product was made and the quality of the marijuana used.

Additionally, unlike smoking weed, edible marijuana products have a long latency period, meaning it can take a while — sometimes hours — for it to take effect.

When marijuana is smoked, THC reaches the brain and takes effect within a few minutes. The effects peak at around 20–30 minutes after smoking and begin to wear off within 2–3 hours (10).

In contrast, the psychoactive effects of edibles usually take 30–90 minutes to kick in. The high feeling lasts much longer and typically peaks at about 2–4 hours after ingestion (10).

The effects of edibles can last for many hours, depending on how much was ingested, as well as your body weight, metabolism, gender, and other factors.

The combination of the highly variable THC concentration and the long latency period of edible marijuana products makes them very easy to unintentionally overconsume, which can lead to unwanted symptoms, such as paranoia and impaired motor ability.

Additionally, though rare, there have been instances of cannabis-induced psychosis, a condition usually related to overconsumption of edible marijuana products that results in symptoms like paranoid delusions, extreme sedation, hallucinations, and confusion (14).

Other side effects related to edible marijuana products include dry mouth, sleepiness, and changes in visual perception.

Edible marijuana products can also interact with alcohol and certain medications, including blood thinners and antidepressants. Therefore, you should avoid consuming edibles with these products (15).

Another concern is that edible marijuana products often resemble regular candies, cookies, and other baked goods, posing a risk for children, pets, and other adults.

In fact, between 2005 and 2011, marijuana-related calls to U.S. poison control centers increased by 30% per year in states that decriminalized marijuana. Many of these calls were related to accidental ingestion of edible marijuana products (16).

Edible marijuana products are difficult to dose and take a long time to kick in. They also resemble regular food products, which may lead to accidental ingestion.

Though smoking weed is not often considered harmful, research has shown that inhaling marijuana smoke can negatively impact health, similar to cigarette smoke.

Both cigarette and marijuana smoke contain toxins, such as ammonia, hydrogen cyanide, and polycyclic aromatic hydrocarbons, that may damage your lungs and increase your cancer risk (17).

Currently, some research shows a weak link between smoking weed and certain types of cancer (18).

Yet, scientists emphasize that it’s unclear whether or to what extent smoking marijuana influences cancer risk, as many available studies are of low quality, and confounding variables, such as cigarette smoking, affect study results (19).

Smoking weed has also been associated with lung inflammation, bronchitis, and even impaired brain function (10).

In contrast, edible marijuana products have not been shown to negatively affect lung health or cancer risk.

Therefore, if you’re concerned about the possible health risks associated with smoking weed, you may want to use edible marijuana products as an alternative.

However, because most marijuana research focuses on smoking weed, the long-term health implications of consuming edibles are still unknown.

Nevertheless, ingesting marijuana is likely safer than smoking it.

Marijuana smoke contains toxins that may negatively affect health. Though edibles are likely safer, the long-term health implications of these products are still unknown due to a lack of research.

Many people enjoy using marijuana products to relax and ease stress, while some take edibles to treat or improve symptoms of a medical condition.

Either way, it’s important to use safe products and choose appropriate dosages to avoid unwanted side effects.

If you’re interested in using edibles to treat a medical condition, your healthcare provider is the best person to consult to learn if medical marijuana is an option.

Depending on where you live, you might be able to get a prescription. In the United States, 33 states allow the use of medical marijuana. It has also been legalized in countries around the world, including Italy and Australia (20, 21).

However, even though marijuana is legal to use in these states, it remains illegal at a federal level and is considered a Schedule I substance under the Controlled Substances Act (CSA).

According to the U.S. Drug Enforcement Administration (DEA), Schedule I substances are “determined to have a high potential for abuse” and are defined as having “no currently accepted medical use” (22).

Yet, many disagree with this classification, especially those who have seen firsthand that marijuana products offer powerful medicinal and therapeutic benefits for many people.

In fact, scientists have repeatedly questioned marijuana regulation, with some arguing that the current legal status is outdated and “thwarts legitimate research” exploring the potential of marijuana in the medical field (23, 24).

Though both social and political views on marijuana are changing rapidly, for now, citizens must abide by the laws set forth by state and federal governments for the use of both medical and recreational marijuana.

When using edible marijuana for the first time — whether for medical or recreational reasons — it’s important to do so safely.

Sticking to prescribed dosage and usage recommendations can help reduce your risk of potential negative effects related to overconsumption.

If purchasing edible marijuana products in a state where recreational use is legal, only purchase products from a licensed dispensary that you trust.

Licensed dispensaries are often required to have their products tested for safety and potency in state-accredited laboratories to be approved for sale.

However, testing protocols vary considerably from state to state, and some don’t require laboratory testing (25).

It’s important to note that marijuana bought from illegal operations or dispensaries that sell untested products can be contaminated with pesticides, mold, fungi, bacteria, heavy metals, formaldehyde, and other substances, which can pose serious health risks (26).

Dispensaries typically carry a variety of marijuana products with different concentrations of THC and CBD, which can be confusing for first-time buyers. Consulting dispensary staff is a smart way to find the best product to suit your needs.

Still, these products may cause side effects, react with common medications, and take a long time to kick in.

Depending on where you live, you may be able to use medicinal or recreational products legally. However, it’s important to only purchase from licensed, reputable dispensaries that sell products tested for purity and potency.