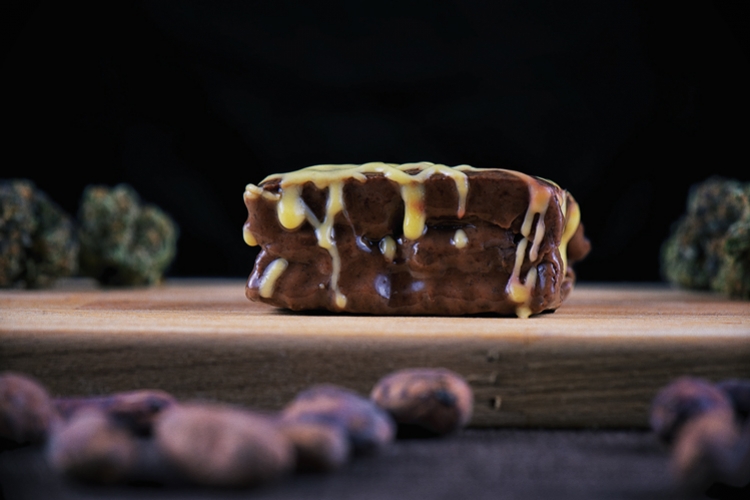 Weed brownies are a classic stoner treat. However, making them can be overwhelming, especially if you’re unfamiliar with the wonderful world of cooking with cannabis.

In this article, we’ve put together all you could ever need to make killer weed brownies at home. First we’ll cover the basic science behind pot brownies, then we’ll show you how to make cannabutter and oil. Finally, we’ll share one of our favourite brownie recipes ever.

Weed brownies are arguably the most iconic form of edibles out there. And while they can seem daunting to inexperienced bakers, the science behind pot brownies is really simple.

THC and some other cannabinoids are fat-soluble, meaning they can be absorbed by fatty substances. All weed brownie recipes make use of this trait by infusing some kind of cooking fat (usually butter or oil) with cannabis.

This is incredibly easy; all it takes is some cooking fat, a stove with a low-heat setting, something to filter the weed from the fat once finished (like cheesecloth), and some top-shelf bud, of course.

Below, we’ll explore two simple ways to infuse THC and other goodies into your brownies using either butter or cooking oil.

Once you’ve got your infused fat locked and loaded, follow the brownie recipe at the end of this article for a delicious, knock-you-off-your feet treat that’ll wow even the most seasoned stoner.

Cannabutter is the backbone of countless cannabis edibles. From classics like pot brownies and cookies to modern savoury favourites like butter chicken, cannabutter is a staple ingredient that can be used to infuse any meal with a wholesome load of weedy goodness.

Unfortunately, there are more cannabutter recipes on the internet than stars in the sky, making it hard to find one that's reliable, especially if you’re lacking experience cooking with weed.

But don’t worry, here’s a foolproof method for making cannabutter that’ll never fail you. And we mean never. For an alternative, check out this other RQS cannabutter recipe.

HOW TO MAKE CANNABUTTER

HOW TO MAKE CANNABIS-INFUSED OIL

Using butter in your recipes is a great way to ensure your brownies come out creamy and delicious.

But let’s face it, not everyone loves the calories associated with butter. Also, butter isn’t vegan-friendly, and there’s no reason our vegan friends should miss out on the brownie experience.

Note: We suggest using a mild-flavoured oil like coconut for sweet recipes like brownies. Here are two alternative recipes for infusing coconut and olive oil.

There are hundreds of brownie recipes out there. Here’s one of our favourites for delicious, fudgy, creamy weed brownies. Be careful, it’ll be really hard to keep your hands off these.

Remember, these brownies are made with butter. If you prefer, you can simply replace the butter with an equal amount of infused oil.

If you ask any cannabis smoker to name a strain out of the blue, the chances of them muttering the words “White Widow” are pretty high. But why? Well, White Widow has earned its spot as one of the most beloved and legendary strains of all time due to its phenomenal taste, high potency, and perfect sativa and indica balance. This legendary variety first gained traction in the Netherlands, where it soon spread all around the world. As well as being a joy to smoke on its own, White Widow is a prime addition to cannabis brownies. The terpene profile within the strain infuses notes of earth and pine into the mix. A genetic profile of 50% indica and 50% sativa contributes toward a balanced high of mental stimulation contrasted by bodily relaxation. This perfect split means there’s something for every cannabis user to enjoy. A THC content of 19% ensures a powerful high that lasts a nice long while.

When making weed brownies, there’s nothing more satisfying than using your own homegrown herb, and White Widow is a very rewarding strain to grow. Plants grown indoors gift yields of 450–500g/m² and grow to heights of 100cm. Plants grown outdoors within pots and garden beds will put out harvests of 500–600g/plant and stretch to almost two metres. White Widow prefers a warm climate where she can mature her potent buds over a bloom period of 8–9 weeks.

Sherbet Queen is an incredibly flavourful lady, making her a first choice for many cannabis users when it comes to crafting some potent brownies. This comes as no surprise considering that this beauty descends from the equally sumptuous Girl Scout Cookies. Baking up some brownies with this strain will add flavours of earth and biscuits into the mix, making for a rich dessert indeed. When consuming these brownies, be prepared for quite the trip, as Sherbet Queen’s 85% indica dominance will launch you into a stoning yet euphoric head-space for hours to come.

Sherbet Queen is a gem to grow and requires very little maintenance during the entire cycle from seed to harvest. Although she is easy to tame, her yields are not the biggest. However, her quality makes up for the lack of quantity. Sherbet Queen can be grown indoors and outdoors, with outdoor plants favouring warm climates like those in the Mediterranean. Outdoor plants will be ready to harvest around the end of September or the beginning of October.

Wedding Gelato is the lovechild of parent strains Girl Scout Cookies, Cherry Pie, and Wedding Cake x Gelato. Was designed with incredible flavour in mind. This lady provides immense and taste bud-busting notes of sweetness, earth, and vanilla. Wedding Gelato should be used with caution by novice smokers, especially in its edible form, as THC levels of 25% are capable of sending even veterans to the stratosphere. The powerful high lasts for a long time and plunges the user into a happy, relaxed, and euphoric state.

As indicated by her notable parents, this is one vigorous strain that has no problem adapting to indoor, outdoor, and greenhouse operations. Indoors, plants are capable of churning out around 350g/m²+, while outdoor plants can achieve up to 450g/plant. Wedding Gelato’s flowering time varies, but usually lands somewhere around 8 weeks.