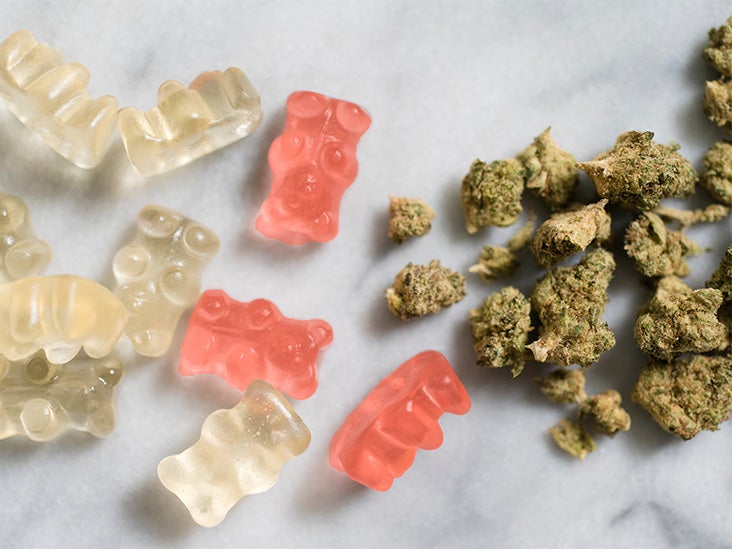 Share on PinterestOverconsumption of cannabis can happen more easily when it’s used in edible form and it can have adverse effects on a person’s health, especially in youths and older adults. Getty Images

Despite their appearance, cannabis edibles — sweet treats like gummies and chocolate bars infused with tetrahydrocannabinol (THC), the primary psychoactive component of marijuana — can be risky for some users.

They may look just like candy, but these potent products definitely aren’t for kids. And that’s part of the problem.

In a new article appearing in the Canadian Medical Association Journal, researchers outlined the most prominent risks associated with cannabis edibles for different users and found that young people are among the most at-risk when it comes to overconsumption and accidental ingestion.

The other most at risk: older adults.

And for those two groups, there are some serious potential adverse health problems that can sometimes result in a trip to the emergency room or just a really, really bad day.

In places where marijuana is legal recreationally and there’s data available, cannabis edibles still remain just a small part of the overall industry. However, in some cases, as in Colorado, they’ve put a disproportionate number of people in the hospital.

There are specific reasons for that, some of which are owed to the difference in how the body processes cannabis based on how it’s consumed.

Smoking results in a near instantaneous onset, whereas consuming cannabis commonly takes between 30 to 60 minutes. But that can vary depending on many different factors including the user’s metabolism and the contents of the edible itself.

“Overconsumption is a significant concern because of the delayed time to onset of its intended effects. Unlike inhaled cannabis, ingested cannabis must be digested first before being absorbed, and once it has been ingested, it’s on board, which means people might not feel effects immediately and hence inadvertently overconsume,” said Dr. Lawrence Loh, MPH, an author of the research and faculty member at the University of Toronto.

Other significant factors in determining how quickly an edible could kick in include: sex, weight, diet, and tolerance to cannabis.

The effects of marijuana edibles also last a lot longer than smoking, with peak THC blood levels occurring around 3 hours after consumption.

The latency of the high from edibles can frequently result in an all-too-common scenario for some users: eating the edible, not feeling the effects immediately, and then consuming more.

By the time the effects are felt, the user could be in over their head.

There’s the potential for cannabis-induced psychosis, which results in paranoia, confusion, and hallucinations.

Last year, the Canadian Journal of Cardiology published a case report on a 70-year-old man who had a heart attack after ingesting a cannabis lollipop.

Cannabis is known to affect the cardiovascular system and can cause an increase in heart rate and blood pressure.

Previous research has shown a higher risk of heart attack following the use of cannabis.

For youths, the risks outlined include panic attacks, psychosis, and hyperemesis syndrome — a serious condition that results in uncontrollable vomiting.

There are also potential long-term effects from cannabis consumption beginning at a young age, including “impaired brain development and poor mental health.”

According to Loh, these two groups are at higher risk because, “[They] have different metabolic rates and pharmacokinetics than other groups and hence respond differently… For seniors, many may have other conditions that might place them at risk of overconsumption and other indirectly related health issues.”

Rais Vohra, the Medical Director for California Poison Control System Fresno Madera District, told Healthline that his experience in dealing with emergencies associated with cannabis edibles are consistent with findings in the report.

He emphasized how important it is to keep these products out of the hands of children in order to avoid accidental exposure.

“What we really try to repeat over and over again is that kids and cannabis don’t mix. We really should be treating these edibles like we do alcoholic beverages and prescription medications and really trying to keep them out of the hands of toddlers and children who can accidentally ingest them,” he said.

And prevention is the best measure because when it comes to treating cannabis overconsumption, there are few options besides just riding it out.

“There’s really no antidote to marijuana toxicity. So, whenever somebody is having these effects of marijuana intoxication you really have to just give them supportive care and let time do its thing,” said Vohra.

“As their body metabolizes the cannabis they will become normal again. It may take a day or two and in the meantime they may require intensive supportive care,” he added.

Vohra said that when it comes to marijuana overconsumption he commonly recommends “home observation,” meaning a trip to the ER probably isn’t necessary.

However, for some extreme cases — particularly in young children and infants — a visit to the hospital is a good idea.

Good regulation of cannabis edibles is the first step in making sure no one ever ends up in the ER because of them.

In Canada, these regulations demand that edibles are stored in plain, child-resistant packaging and require a standardized health warning sign on them.

“Common sense and best business practices dictate that in a legally regulated adult-use market, cannabis-infused edible products ought to be readily distinguishable from non-infused products by their packaging. Moreover, such products ought to be properly and accurately labeled for potency and cannabinoid content and served in childproof packaging,” said Paul Armentano, the Deputy Director of the National Organization for the Reform of Marijuana Laws (NORML).

Armentano was not affiliated with the report.

“I think that any step that we add to ensure safety, they all synergize. At the community level people just need education and reminders in many different forms that these products can be hazardous,” said Vohra.