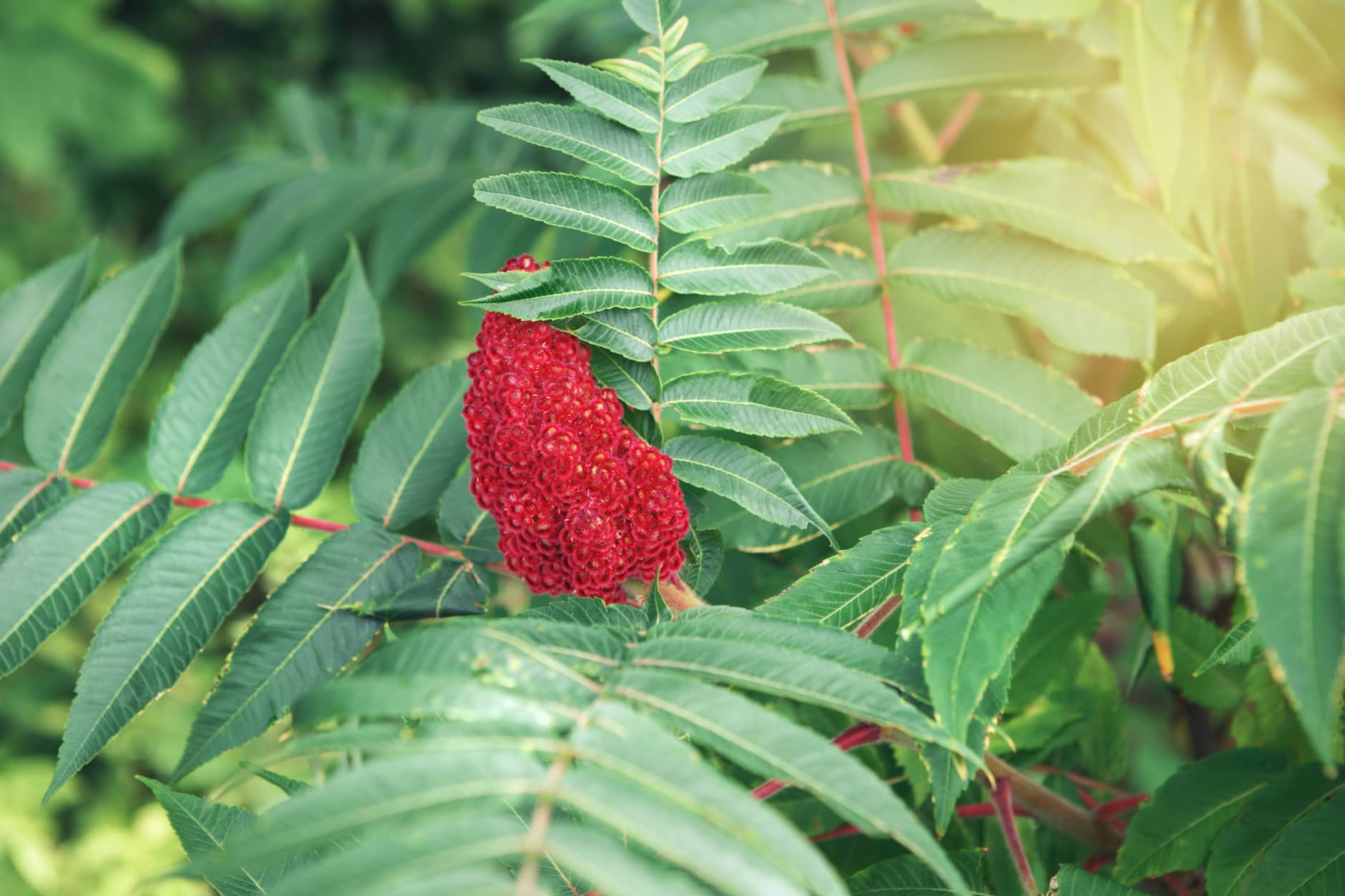 When most people think of “sumac,” they think of the itchy relative of poison ivy. Staghorn sumac, however, is an entirely different variety, and is both edible and delicious! Here are some of the ways people around the world use it, plus some instructions for harvesting, drying, and using it in a recipe!

Staghorn sumac, or Rhus typhina, is easily identified by the red fruit clusters resembling an Olympic torch, or the velvety antlers of a male deer (stag), hence the name of “staghorn.”

Sumac is very popular in both the Middle East and the Mediterranean. In places like Israel, Turkey, and Italy, people use dried, ground sumac as a flavoring and a color enhancer. These berries have a tart flavor that is reminiscent of lemons, but not as sour. In fact, before lemons were imported to Europe, the Romans used these berries to add a tangy taste to their meals. They are high in vitamins A, C, and antioxidants.

Today, many Middle Eastern cultures still prefer sumac to lemons or vinegar. People keep it in shakers on the table to season their favorite foods in much the same way that we use salt or pepper.

Sumac berries also have a long history as an herbal remedy. Early pioneers treated coughs, sore throats and fevers with sumac, while American Indians used these berries to treat anything from reproductive problems to stomachaches and wounds.

How to Harvest and Preserve Sumac

To find sumac, look along the edges of woods, roadways* and along banks and other non-wooded but unmaintained areas. Staghorn sumac trees are short – between five and 15 feet tall – and the branches have between 4 and 15 pairs of long, pointed leaves. The most prominent feature is the clusters of bright red berries that top the trees in the late summer and early fall. 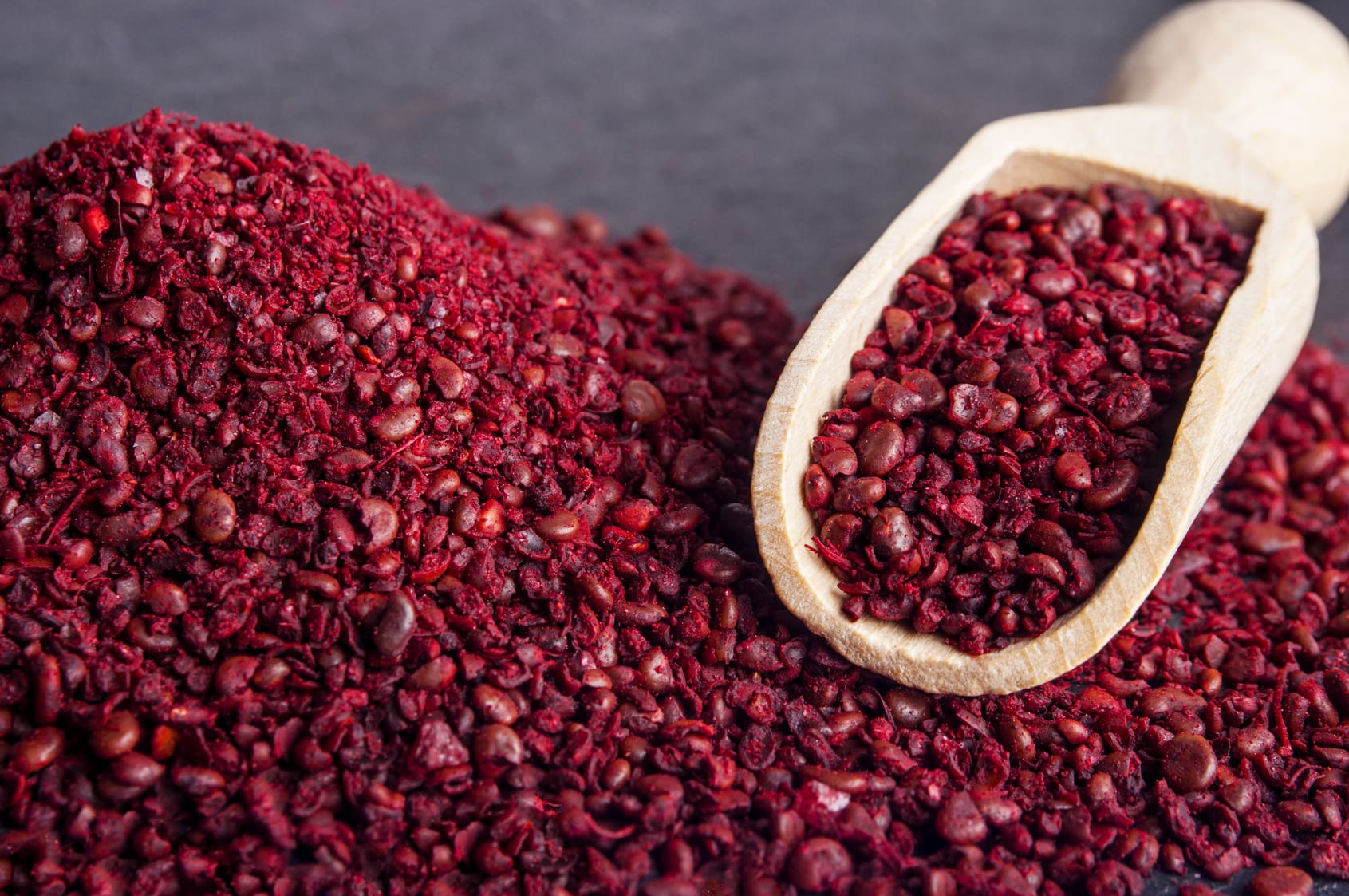 To harvest the berries, simply cut the clusters, called “bobs” away from the trees. Roll a couple of the velvety berries between your fingers and then give your finger a lick – you’ll taste the tartness! You can use the berries as they are, or you can dry them for use throughout the winter. If you choose to dry them, dry the entire cluster with a dehydrator or under heat lamps overnight. Ovens usually can’t heat low enough to dry them gently (125º-150º). Once dry, use a blender to separate the dried berries from the seeds and sticks. Then you’ll be able to sift the sumac powder through a fine mesh strainer for later use.

Ground, dried sumac berries taste great as a spice rub for lamb, fish and chicken. These berries are also used as a salad topping, and you can include them in your favorite dressings. Middle Eastern chefs use sumac as a topping for fattoush salad, and are often sprinkled on hummus to add both color and a zesty flavor. In the United States, one of the most common ways to use sumac is to make red lemonade. Some even call it the “Lemonade Tree.” Give it a try!

Add the berries to the water and use a potato masher or a spoon to crush the berries so they release their flavor. Let the berries steep for 10 to 15 minutes. Once the sumac lemonade is flavored to your liking, pour it through a strainer or cheesecloth to remove the berries. Then add enough sugar to sweeten the drink, but not so much that you lose the tangy flavor. Pour your sumac lemonade over ice and enjoy!

*Notes: You may want to avoid consuming Sumac that grows close to roadways because of its exposure to car fumes and toxins.