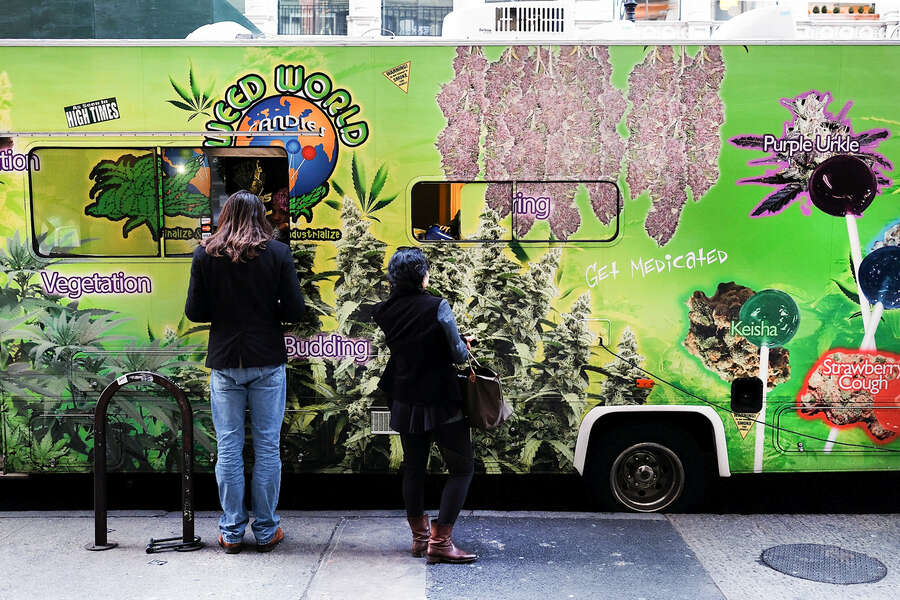 Weed isn’t legal in the state of New York, but the laws are easing up... a little bit. Carrying 25g or less will get you a $100 fine, but selling the green stuff to a minor could get you up to 25 years in prison.

So how does Weed World Candies sell weed-laced edibles to people without getting in too much trouble with the cops?

It’s all about a loophole regarding the ingredients in the products. Despite the fact that Weed World trucks are emblazoned with the names of recognizable pot strains, there’s technically no marijuana in the candies -- at least, not the stuff that makes pot fun.

“There is no THC in the pops,” a Weed World associate, who declined to be named, told me while hanging out of a window of the truck parked along Sixth Ave in Greenwich Village one day. He meant tetrahydrocannabinol, the chemical most responsible for marijuana’s psychoactive effects (i.e., feeling “stoned”).

Instead, the lollipops contain tiny trace amounts of cannabidiol (CBD), an entirely separate non-psychoactive component in the plant that’s known for its medicinal and therapeutic benefits, but without the high. “So you’ll get relaxed and that’s it,” the truck attendant told me.

These days, a lot of companies are taking advantage of the relaxing qualities of CBD -- a company called Foria, even makes CBD-laced lube.

That’s why you can buy these $5 lollipops without worrying about having a weird trip. CBD in small quantities is totally legal to sell... but that’s probably not why these trucks sell these things on busy street corners. It’s more than likely that people buy the lollipops because they don’t read the fine print, nor do they inquire about the effects it’ll have on your body. The only problem is, this stuff doesn’t even compare to smoking a joint.

Getting high (or not) is beside the point, according to the head of Weed World -- a man named “Dro Man,” who took the time to chat with me over the phone about his company’s mission statement.

“This is about marijuana awareness... you know, pushing for the legalization of marijuana nationwide. We pass out a lot of pamphlets and literature about the laws and different things [marijuana] can be used for. It's not so much about making the money as we are about promoting and making people aware of marijuana laws.”

Based in Alabama, Weed World has been in business for about 16 years, and now operates around a dozen trucks parked in various neighborhoods around NYC. You can buy these pops from the trucks themselves or in large quantity through an eBay link on the Weed World Candies site. When asked about the possibility of a nationwide legalization of marijuana, Dro Man says Weed World is ready to take full advantage: “We’ll be in a better position if weed gets legalized. You know, we want to be a household name. We want to be the number one name in the business, even though we don't carry actual marijuana products. The thing is, too, there are a lot of different CBD products and most of them don't have a pleasant taste. That’s what makes ours better... people love the taste."

To get a better idea of what people are actually getting out of eating these lollipops (since they’re clearly not getting high), I decided to do a taste-test of the top-sellers and rank them (for science, of course).